Delivery & prices
View your order
Contact us
Read our Blog
LOST IN MUSIC: A BLOG
We're finding, buying & framing records all day. Every once in a while we pause for thought.
All Hail the U.S. Male?
By August 1977, the great teenage revolutionaries didn't mean a lot if you were a teenager. People's dads liked Elvis Presley; people's long-haired elder brothers liked the Beatles. Cliff Richard and the Stones were still chugging along. Old Elvis and Beatles songs briefly re-appeared in the Top 20 while their films were on television a lot of the time.

British Rock History has been very kind to the Beatles and quite sniffy about Elvis. Elvis is lampooned for his self-indulgent lifestyle, while the Beatles changed the world. But Elvis cast a long shadow; he was huge in the 1970s. You won't see him much on the Top of the Pops repeats on BBC4 nowadays but he regularly had songs in the charts, middle aged men adored him, TV stars impersonated him, and most kids knew a dozen songs of his word for word.

I meet a lot of bluff, ageing, and usually male music fans today whose passion for Elvis still burns fiercely. When they were kids in the 1950s Elvis was theirs and theirs alone: Heartbreak Hotel, All Shook Up changed their world forever while the old folks thought he was loud and crude. (Isn't that how pop has always been?)

They'll forgive the conveyor belt of gloopy early 1960s hits, regret how the outrageous cool and breathtaking good looks started to wrinkle and curve but they remember how, at the same time, that fabulous voice slowed, deepened, soared and became an awesome, wondrous sound as the choice of songs got better and better: In the Ghetto, Always on My Mind, American Trilogy, I Just Can't Help Believing. I have a soft spot for the cheerful swagger of The Wonder of You, his last Number One in 1971, before he died forty years ago today. These were seriously good performances. 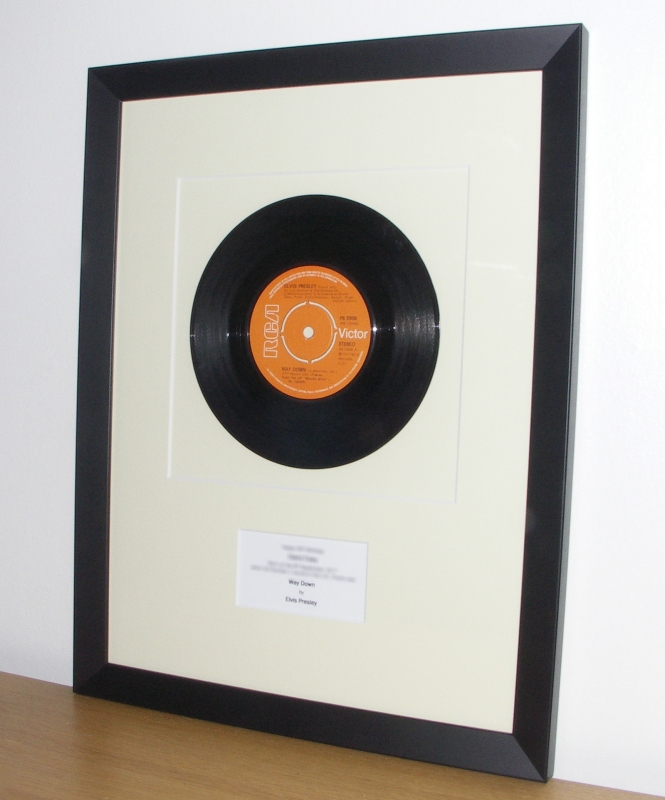 His posthumous Number One was Way Down (which we framed for a customer recently - shown above). Elvis fans would probably say it was well sung but it was filler; the dum-de-dum rhythm and lazy words of love in keeping with the early 1960s hits. I remember it very well and rather fondly. 1977 may have been the highpoint of punk and new wave, but it wasn't that popular: the charts were full of naff ballads and disco. I liked that Way Down had a beat and even aged 12 I could tell the voice was special.

For what it's worth, I think there are three reasons why Elvis isn't as revered by the Rock Historians as the Beatles. Firstly, he didn't write a note of his own music; he was an old fashioned performer of tunes. Rock Historians prefer that you write your own songs and if the standard dropped - most of the White Album and Let It Be, The Ballad of John and Yoko - then at least you were baring your soul. This also meant that he was middle of the road rather than striking a new path as the Beatles did. Thirdly, Elvis had come and gone by the time most of today's middle aged Rock Historians were kids. Their thing was the Beatles and, for the younger writers, the Sex Pistols.

There was no video footage of Elvis singing Way Down so this, remarkably, is how Top of the Pops marked the passing of the U.S. Male: 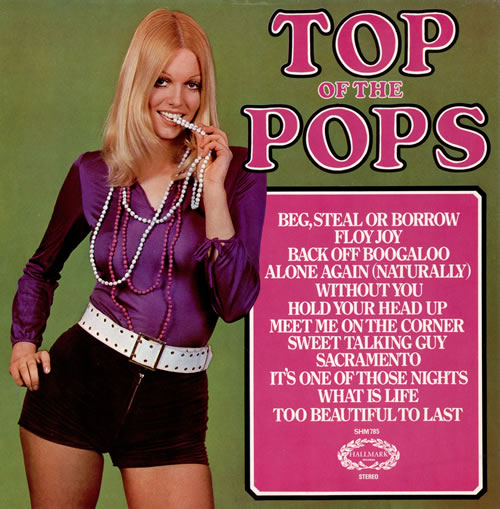